1874-1951.  Joseph Christian Leyendecker was a German-American illustrator. He is considered to be one of the preeminent American illustrators of the early 20th century. He is best known for his poster, book and advertising illustrations, the trade character known as The Arrow Collar Man, and his numerous covers for The Saturday Evening Post.

A Stroll in the Snow cross stitch pattern 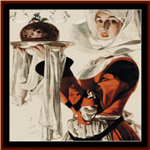